As many other hypervisors, KVM provide several types of networking. KVM use NAT in default, in which case the guest can reach the outside world (the host and all place the host can reach) but the outside world cannot reach the guest. That means, if you don’t need to access the guest through network (SSH for example), NAT is good enough for you. However, if you want more, let me introduce you the bridging way. 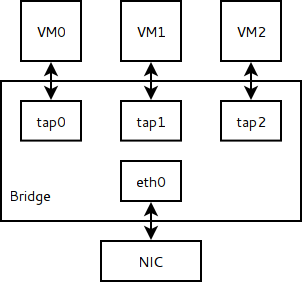 Before writing scripts and typing commands, install some tools we need: ip, brctl and tunctl. In ArchLinux, install the following packages:

Create a bridge is not just as simple as brctl addbr br0, some extra configurations must be done.

And in contrast to creating a bridge, the opposite operation is to delete it.

Creating tap device is the job of qemu, what the user need to do is provide a config script and a deconfig script. The config script qemu-ifup is called when a guest starts.

The deconfig script qemu-ifdown is called when a guest exit.

Now everything is setup, start guest with the following parameters:

The last thing is to setup guest’s network as the same as the host but choose a unique IP address.

Repeat Commands on a Dozen VMs with a Single Loop »